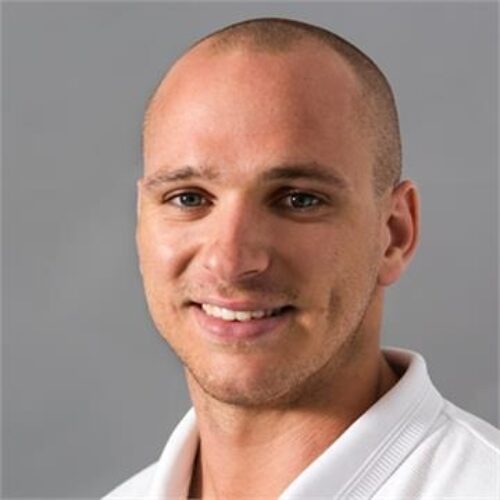 Imagine how incredible it would feel to help transform hectares of unused grazing land into a thriving future city for over 50,000 people. Tobias doesn’t have to imagine - he’s been part of it. Our Water Infrastructure Lead has played a critical role in some of South-East Queensland’s largest and most exciting urban developments.

This humble yet driven team leader creates a real, visible impact every day - not only for his clients, but also for his team. Tobias is coaching our next generation of Water Engineers, ensuring they get the same growth opportunities he’s been given during his career at Calibre.

“I started at Calibre as a Graduate Engineer, so helping our new Graduates succeed is a rewarding experience for me,” Tobias says. “There is so much potential for people to grow here. I’ve always been given every opportunity to push and achieve more than what I thought possible.”

After finishing his Environmental Engineering degree, Tobias joined Calibre in 2012, eager to forge a path with people who challenge, grow, and win together.

“I was originally inspired to become an Engineer by my dad, who started as an Electrical Engineer,” Tobias says. “I saw the pathway it took him - he’s been all over the world, working for all sorts of companies in roles you wouldn’t even imagine being related to electrical engineering. I saw engineering as a broad horizon, full of opportunities.”

Starting out as one of two Brisbane-based Water Engineers, Tobias’s work involved the planning and design of infrastructure to ensure safe and efficient servicing of future communities. Initially, this two-person team was an extension of Calibre’s Urban Development branch. But over the years, the team has steadily grown, and in 2021, became a department in its own right. Today, Tobias leads our 11-person Water Infrastructure Team, which falls under our recently formed Water, Power & Energy sector. And there are plenty of new and innovative projects and challenges in the pipeline.

“I’ve grown my whole career at Calibre, and it’s been exciting to see the organisation grow in that time, too,” Tobias says. “I see our Water Infrastructure Team as helping Calibre to really step up and have greater diversity across its assets and projects.”

Tobias consistently goes above and beyond to make great projects work. He’s been instrumental in several large-scale urban projects, including Stockland’s 2,300-hectare Aura development on the Sunshine Coast.

Formerly Caloundra South, Aura is expected to house more than 50,000 people across 20,000 dwellings. To meet the needs of this growing population, Tobias and his team helped plan and design trunk infrastructure to provide safe drinking water and manage sewage.

“It was pretty incredible, helping to convert disused farmland into a new city that will house tens of thousands of people,” Tobias says. “Our role included a lot of planning, modelling, and water infrastructure design. I’m proud to say we’ve helped create a place for a community to thrive in. When you hear the general public talking about Aura, it’s a great feeling, knowing we’ve played a key role in making that project a reality for people.”

Tobias and the team have also had the opportunity to work on unique projects, such as the planning and design of water infrastructure to Great Keppel Island. This included a submarine pipeline to transfer water to the island and service a future planned resort.

“Working in the Water Infrastructure Team has provided me with opportunities to be involved with a diverse range of projects. The challenge of working in new environments and delivering different projects keeps work interesting.”

Although Tobias’s role still involves some hands-on work, he spends most of his time developing client relationships, pursuing new projects, and providing the team with opportunities to progress their careers.

“Our team continues to grow. Getting our new Graduates up to speed is hard work, but it’s rewarding to see individuals become self-sufficient and contribute to our team vision. We all have each other’s back. Everyone on the team is on board with what Calibre is trying to achieve, which is all about enabling communities to thrive.”

New challenges in the pipeline

“Coming out of school, I wasn’t the most outspoken or confident person, but it’s something I’ve been able to develop over time,” Tobias says. “Calibre has provided many opportunities to attend conferences, presentations, and gala dinners. That has really helped with my soft skills.”

Renewable energies is an area Tobias is particularly interested in, and one he plans to explore further with the team.

“Our team is working closely with Sevengen - Calibre’s new clean technology and sustainable solutions company. Sevengen focuses on renewable energies, such as hydrogen and solar farms, and I’m keen to explore this area further. That’s the great thing about Calibre. It gives you that flexibility to pursue what you’re interested in. No one is pigeonholed.”

As a father of two young children, Tobias values the flexibility of his role. He says he loves working for an organisation that treats him as a person, not a number. And he looks forward to expanding in his role, continuing to help his team members develop as they explore new projects and opportunities together.

“There’s a reason why people like me have been at Calibre for so long,” Tobias says. “Yes, there are challenges, as there are with every business. But there is room to grow and advance your career here. I am blessed to have a great manager and team around me. It makes the workplace an enjoyable environment, and I’m excited by what’s in store for us.”